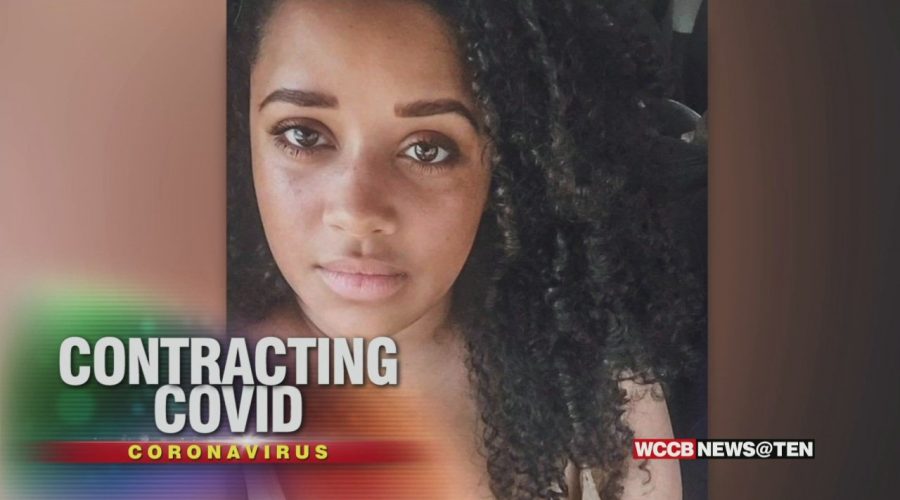 LANCASTER, SC. — Vaccinating against COVID does not increase the risk of miscarriage or birth defects says the CDC.

Tonight, the husband of a Lancaster woman who nearly died from getting COVID while pregnant tells WCCB Charlotte’s Alexandria Elich if he knew what he does now…his wife would have gotten vaccinated.

It’s an update to a story we first brought you on WCCB.

Jamal Chubb, Lancaster resident, says “I’d rather know what we know now and us having gotten vaccinated then have to watch Cierra literally die and be brought back to life.”

The past 60 days have been an absolute nightmare for Jamal Chubb.

His wife almost dying from COVID, after contracting the virus while pregnant and unvaccinated.

Chubb says “When it comes to times that I thought she wasn’t going to make it, I mean that is what doctors have told me all along. They said that she should be on hospice.”

Chubb says July 12th, their daughter came home from victory sports camp with a headache, cough, stomach ache, and fever. Their son developed the same symptoms, but they went away the next day. Then Chubb’s 9-month pregnant wife started having the same symptoms.

Chubb says they took her to the hospital and doctors said there was a problem with her lungs.

Cierra gave birth to her son, Miles, via C-section. Two days later, her husband rushed her to the ICU…she was put on a ventilator.

Chubb says “She worked with physical therapy today and she was able to stand twice and she is you know getting some of her muscles back.”

According to a report by the CDC, more than 31 percent of pregnant woman who caught coronavirus were hospitalized (compared to 5.8 percent of non pregnant women).

Thursday, CDC officials said vaccinating against COVID does not increase the risk of miscarriage or birth defects.

Chubb says if this information was available earlier, his wife would have for sure gotten vaccinated.

Chubb says “Now that we know that there’s an FDA approved vaccine through Pfizer and there is a CDC recommendation with studies about how deadly it is for pregnant people, we take that all day long.”

Chubb tells Alex the air sacks in Cierra’s lungs are growing back after getting destroyed after contracting COVID and she’s recovering well.

He says he’s so grateful for the community support through this process.

After three children together, it was the first time in Jamal Chubb’s marriage he left the hospital without his wife, Cierra.

“Miles was all better and ready to come home, but Cierra had to stay in the hospital because she wasn’t better,” Chubb says.

Chubb says July 12th, their daughter came home from victory sports camp with a headache, cough, stomach ache, and fever. Their son developed the same symptoms, but they went away the next day. Then Chubb’s 9-month pregnant wife started having the same symptoms.

“We took her to the hospital; they looked at her lungs said it was a problem, and they took her from the hospital in Lancaster to Prisma Health in Columbia, South Carolina.”

Cierra gave birth to her son, Miles, via C-section. Two days later, her husband rushed her to the ICU.

“Well, they put her on a ventilator in four hours later give me a call, and they were questioning whether or not she would make it through the night.”

Friends started a GoFundMe for the family to cover hospital bills. At last check, nearly $60,000 was raised in three days. Chubb says Cierra is not vaccinated but had every intention of getting vaccinated after their son was born. He clarifies they are not anti-vaxxers but were being cautious.

“Cierra cares way more about our children than she does herself, and I was vaccinated; I was the only one in the house who didn’t get sick. But Cierra didn’t know if there would be crazy side effects that would harm our son, Miles.”

Chubb says the sports camp where he says his daughter got sick sent an email that multiple employees had tested positive for Covid, but it could be false-positive tests. The email went onto say some of their facilities have have environmental issues that would cause staff to have similar symptoms of Covid. WCCB reached out to the camp and has not gotten a response.