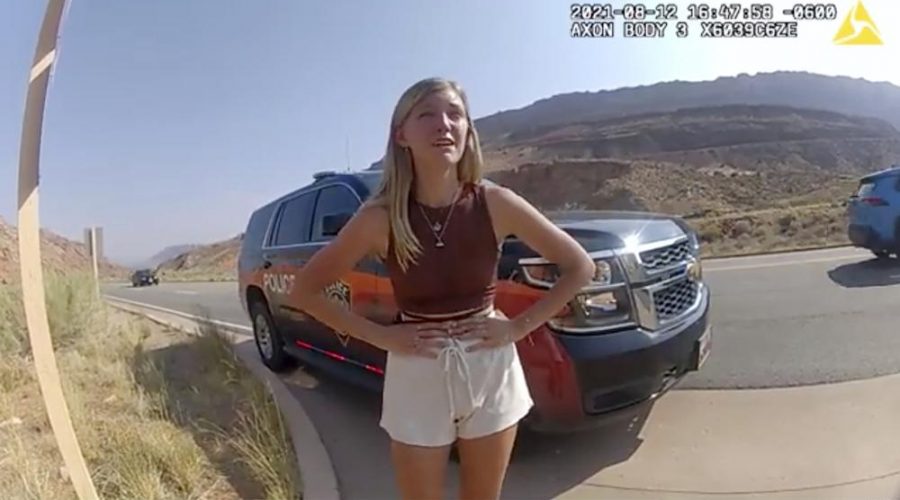 ST. PETERSBURG, Fla. (AP) — Police video shows a Florida woman who disappeared during a cross-country journey in a converted camper van had an emotional fight with her boyfriend in a Utah tourist town before she vanished.

The video released by the Moab Police Department shows that an officer pulled over the van on Aug. 12 after it was seen speeding and hit a curb near the entrance to Arches National Park.

Inside was Brian Laundrie, 23, and his 22-year-old girlfriend, Gabrielle “Gabby” Petito, who was reported missing by her family a month later and is now the subject of a nationwide search joined by the FBI.

Police in North Port, Florida, where the couple lived, say Laundrie is a “person of interest” in her case. He’s not been charged, but he’s also not cooperating.

North Port Police Chief Todd Garrison publicly vented his frustration over his lack of help on Wednesday, pleading for Laundrie’s lawyer to arrange a conversation. “Two people left on a trip and one person returned!” the chief’s tweet said.

The body camera video shows Petito visibly upset when an officer approached them.

“We’ve just been fighting this morning. Some personal issues,” she tells him, adding that she suffers from obsessive-compulsive disorder that affects her behavior.

“Some days, I have really bad OCD, and I was just cleaning and straightening up and I was apologizing to him saying that I’m so mean because sometimes I have OCD and get frustrated,” she said.

Laundrie says on the video the couple got into a minor scuffle that began when he climbed into the van with dirty feet, and said he didn’t want to pursue a domestic violence charge against Petito, who officers decided was the aggressor.

“I’m not going to pursue anything because she is my fiancée and I love her. It was just a squabble. Sorry it had to get so public,” Laundrie says.

Ultimately Moab police decided not file any charges and instead separated the couple for the night, with Laundrie checking into a motel and Petito remaining with the converted sleeper van.

Petito and Laundrie started their drive across the U.S. in July from New York’s Long Island, where both grew up. They intended to reach Oregon by Halloween according to their social media accounts, but Petito vanished after her last known contact with family in late August from Grand Teton National Park in Wyoming, authorities said.

Petito’s parents released a letter through their attorney on Thursday to Laundrie’s parents, asking them to help investigators locate Petito, despite their instinct to protect their son.

Laundrie’s attorney, Steven Bertolino, said the Laundrie family is hoping for Petito’s safe return, but he’s asked them not to speak with investigators.

“I can’t speculate as to why he’s not talking, but he has the pieces to the puzzle that we need to find Gabby,” Garrison said Thursday on ABC’s “Good Morning America.”

Garrison said at a news conference Thursday that the investigation remains a missing persons case, not a murder probe, and that no intensive searches have begun because it’s unclear exactly where authorities might look.

“We’re still trying to nail down geographic areas,” the chief said. “There’s a lot of information we are going through. Our focus is to find Gabby.”

The missing woman’s father, Joe Petito, also appeared at the news conference to urge anyone with knowledge about his daughter to come forward.

“What I want from everybody here is help. Whatever you can do to make sure my daughter comes home, I’m asking you to help. Nothing else matters right now,” Joe Petito said.

Authorities are also looking for any possible connection between Petito’s disappearance and the still-unsolved slaying of two women who were fatally shot at a campsite near Moab.

Their bodies were found Aug. 18, six days after the incident between Laundrie and Petito. The two women, Kylen Schulte, 24, and Crystal Turner, 38, had told friends they feared a “creepy man” they had seen nearby might harm them.

“They’re looking into that potential connection,” said Joshua Taylor, public information officer for North Port police. “I have not heard of any information that links these two cases together. I understand the timing is suspicious. You never know. I’m not going to say we’ve ruled it out.”

Petito and Laundrie were childhood sweethearts on Long Island before moving in 2019 to live with his parents in North Port, about 34 miles (54 kilometers) south of Sarasota.

Petito is white, 5-foot-5 (1.6 meters) and about 110 pounds (50 kilograms), with blonde hair and blue eyes, police said. She has several tattoos including one on a forearm that reads, “let it be.”

Click here to read more about the ongoing case.