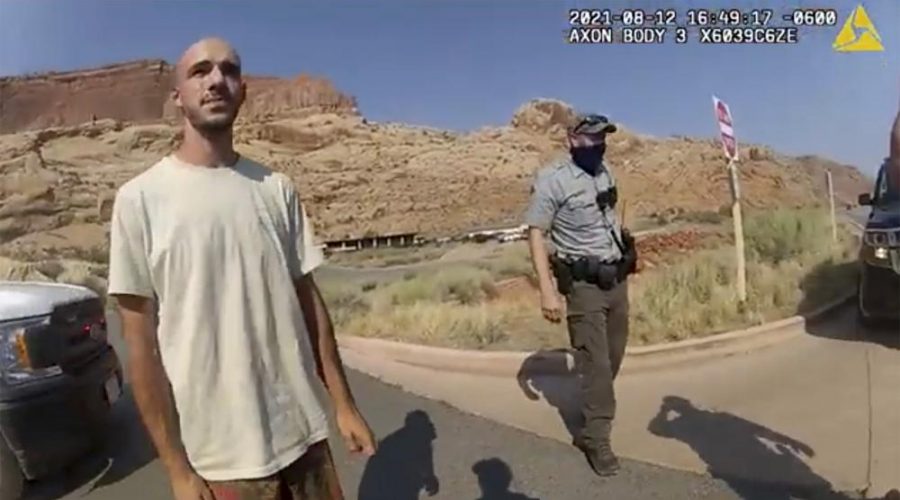 BILLINGS, Mont. (AP) — The boyfriend of Gabby Petito, whose body was found at a national park in Wyoming after a cross-country trip with him, was charged with unauthorized use of a debit card as searchers continued looking for him Thursday in Florida swampland.

A federal grand jury indictment filed in U.S. District Court in Wyoming alleges Brian Laundrie used a Capital One Bank card and someone’s personal identification number to make unauthorized withdrawals or charges worth more than $1,000 during the period in which Petito went missing. It does not say who the card belonged to.

FBI spokeswoman Courtney Bernal declined to reveal the nature of the charges made to the debit card.

FBI Special Agent in Charge Michael Schneider said an arrest warrant issued Wednesday over the alleged fraudulent use of the bank card will allow law enforcement across the country to continue pursuing Laundrie while the investigation continues into Petito’s homicide.

Laundrie has been named a person of interest in the 22-year-old woman’s death. The case has garnered enormous public interest — but also raised uncomfortable questions over the unequal attention given to the hundreds of cases of Native American and other minority women missing or murdered across the United States.

In Florida, searchers on Thursday spent a fifth unsuccessful day searching for Laundrie in the forbidding wilderness preserve near his parents’ home.

The search at the Carlton Reserve park was set to resume Friday, said Joshua Tayler with the city of North Port, where the park is located. It began after Laundrie told his parents he was going there, several days after returning alone Sept. 1 from his trip out west with Petito.

The indictment says the unauthorized use of the debit card occurred from about Aug. 30 to Sept. 1.

Laundrie family attorney Steven Bertolino said it is his understanding that the arrest warrant was related to activities that occurred after the death of Petito, and not to her actual demise.

“The FBI is focused on locating Brian and when that occurs the specifics of the charges covered under the indictment will be addressed in the proper forum,” Bertolino said in a text message to The Associated Press.

An attorney who has represented the Petito family also did not immediately respond for comment.

Petito was reported missing Sept. 11 by her parents after she did not respond to calls and texts for several days while the couple visited parks in the West. Her body was discovered Sunday in the vicinity of a remote, undeveloped campground along the border of Grand Teton National Park in northwestern Wyoming.

Teton County Coroner Brent Blue classified Petito’s death as a homicide — meaning her death was caused by another person — but did not disclose how she was killed pending further autopsy results.

Officials urged anyone with knowledge of Laundrie’s role in Petito’s death or his whereabouts to contact the FBI. With online sleuths and theories multiplying by the day, the FBI and police have been deluged with tips about possible Laundrie sightings.

“No piece of information is too small or inconsequential to support our efforts in this investigation,” Schneider said in a statement.

Petito and Laundrie grew up together on Long Island, New York, but they moved in recent years to North Port where his parents live. Their home, about 35 miles (55 kilometers) south of Sarasota, was searched by investigators earlier this week, and a Ford Mustang driven by Laundrie’s mother was towed from the driveway. Authorities believe Laundrie drove that car to the Carlton Reserve before disappearing.

The couple documented online their trip in a white Ford Transit van converted into a camper, but they got into a physical altercation Aug. 12 in Moab, Utah, that led to a police stop for a possible domestic violence case. Ultimately, police there decided to separate the quarreling couple for the night. But no charges were filed, and no serious injuries were reported.

The city of Moab said it will conduct a formal investigation into the handling of the dispute. City officials said they were not aware of any breach of department policies, but intend to make a “thorough, informed evaluation” based on the results of the investigation.

On Thursday, Interior Secretary Deb Haaland told reporters in Washington, D.C., that the extensive news media coverage of the case should be a reminder of missing or murdered Native American girls and women.

Haaland, the first Native American Cabinet secretary, said that her heart goes out to Petito’s family, but that she also grieves for “so many Indigenous women″ whose families have endured similar heartache “for the last 500 years.″

Click here to read more articles about the case.