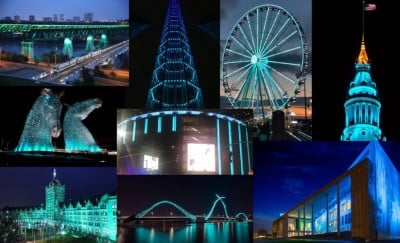 CHARLOTTE, N.C. — Several Charlotte landmarks will light up teal on Thursday to raise Alzheimer’s awareness as part of the Alzheimer’s Foundation of America’s (AFA) Light the World in Teal program.

The NASCAR Hall of Fame, Duke Energy Center for the Performing Arts, and Romare Bearden Park are among the Charlotte sites participating in the program, along with more than 415 buildings around the world.

Officials say Light the World in Teal is an annual program held in November as part of Alzheimer’s Awareness Month. Both people and places around the world are expected to go teal, the AFA’s Alzheimer’s awareness color, to show support for the millions of people affected by Alzheimer’s.

“Light the World in Teal is a tremendous initiative that demonstrates unity around the world in the battle against Alzheimer’s disease,” said Charles J. Fuschillo, Jr., AFA’s President & CEO. “We are grateful to these Charlotte sites for shining a spotlight on Alzheimer’s disease and invite others to join them in going teal on November 4.”

Officials say individuals can participate in the Light the World in Teal program on Thursday by wearing teal, turning their porch lights teal, and turning their social media profile picture or cover photo teal.

Individuals participating are also encouraged to use the hashtag #AFALightTheWorldInTeal when posting to their social media to help raise Alzheimer’s awareness.

Families looking for information on Alzheimer’s disease or support services can call AFA’s Helpline at 866-232-8484 or by clicking here.