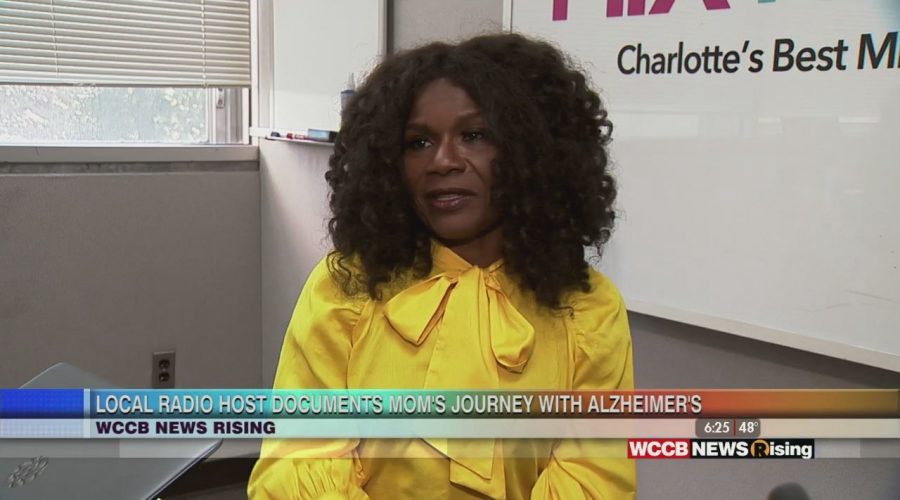 CHARLOTTE, NC– More than six million Americans are currently living with Alzheimer’s disease. More than likely, someone you know has it or has a loved one who is battling the disease. Ramona Holloway, the Charlotte radio and TV icon, has been very public on social media about taking care of her mother.

Currently, 83% of the help provided to Alzheimer and dementia patients are family members and Ramona Holloway knows all too well that it can take a physical, emotional and financial toll on caregivers.

Holloway says, “I feel it’s really important to speak out about Alzheimer’s and other dementia because of the toll it takes on an entire family. Oftentimes, the caregiving is even harder on the giver than their loved one.”

Ramona Holloway is a voice you likely have heard on the radio here in Charlotte. She even appeared on the Edge here at WCCB. She wears several hats from the host of the MIX 107.9, author and TV commentator…but her favorite is Wheezy’s daughter.

So when her mother Louise “Wheezy” Glover was diagnosed with dementia, her role shifted to caregiver. Holloway’s mother captured the hearts of millions on TikTok with her witty charm, and signature dance moves.

Holloway wanted to document everything because she says, she didn’t want to miss a moment. She says, “Them forgetting that they love us at one point… is really hard.” Although her mother forgot who she was at times, Holloway says she is grateful for every moment they can spend together.

Holloway says, “I told her that I was her daughter and said you’re my mom. She’s like, ‘who is this old lady?’ She thinks I’m nuts. Meanwhile, my heart was breaking. So, I called my friend and she said’ Ya know what Ramona? You have to wake up every morning and say thank you for whatever she remembers that day.”

Holloways says if you’re caring for someone with Alzheimer’s and find yourself getting frustrated, remember this advice; “Start recognizing the illness versus the person. Know that the anxiousness and the accusations sometimes, the change in personality from the person you love is not them. The person you love is still in there, it’s just that their brain is going haywire. Just start recognizing that’s not my mom, that’s not my dad or my grandma…that’s the disease.”

When Wheezy passed away in August of 2021, Holloway found herself in another new role; continuing the conversation and advocating about prevention. She says, “We have to do a better job of taking a look at some of those risk factors and figuring out how we can reduce them so we can live better and longer until we find a cure.”

The number of Alzheimer’s and dementia patients is growing fast, it’s expected to double to more than twelve million in the next 30 years. If you want more information on the signs of dementia and resources available to caregivers, go to https://www.alz.org/.