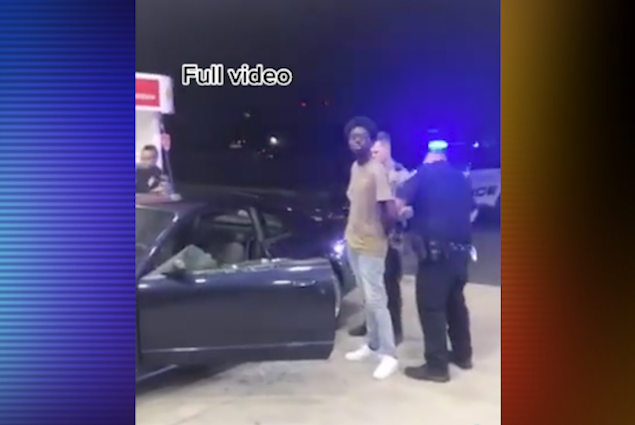 CONCORD, N.C. — The Concord Police Department released a detailed statement on Thursday after lawyers accused officers of a “violent act of police misconduct” while conducting a traffic stop.

Lawyers with the Oakhurst Legal Group say a car driven by their client Davion Pringle was singled out without justification around 10:45 p.m. on August 27th.

Lawyers say when Pringle was signaled to pull over he was on a dark county road, and given the “numerous examples of dangerous and hostile interactions between law enforcement and Black men,” Pringle continued onward until he reached a well-lit gas station.

Once there, lawyers say Cabarrus County officers approached Pringle’s car with guns drawn and then proceeded to shatter his window before “aggressively” removing him from his car.

In a statement released on Thursday, September 16th, Concord Police responded to the accusations.

Police say on August 27th officers attempted to stop a car just north of Stough Road on NC Highway 49 around 10:51 p.m. for failing to display a license plate, which is a violation of NC General Statutes.

An officer alerted the driver of the suspect vehicle by flashing his blue emergency lights, but the driver, later identified as Davion Pringle, refused to pull over.

Police say that officer continued to alert Pringle via emergency lights and siren, but Pringle still refused to pull over and changed lanes multiple times without changing his speed.

Pringle drove southbound on Highway 49 at around 55 mph for three miles, according to a news release.

Police say during that time Pringle passed by no less than four well-lit areas along Highway 49, as additional law enforcement officers were called to assist the officer involved and intercept the fleeing vehicle.

As they continued to approach the vehicle, officers say they had their guns in a “low ready” position “as is customary during ambiguous and potentially dangerous circumstances such as this where it is unknown if an individual is reaching for a weapon.”

Shown in the viral TikTok video, the Sheriff’s deputy used an unknown object to break the driver’s window.

In response to this, the officer involved says he unlocked the driver’s door and opened it, allowing Pringle to eventually step out under his own power.

Officers say Pringle was then placed under arrest and taken to the Cabarrus County jail where he was charged with misdemeanor resisting/delaying/obstructing arrest and misdemeanor failure to stop for blue lights/siren.

Pringle was then given a warning for failing to display a registration plate and failing to carry vehicle insurance, according to a news release.

Police say the passenger of the vehicle, Imani Grier, was only detained for two minutes during the stop for officer safety reasons.

She was not charged or cited, and police say no force was used against her. Officers say they even helped her communicate their location to Malissa Baxter, Pringle’s mother, so she could respond to the scene.

Concord Police say contrary to Oak Legal Group’s accusations, there was no “later determination” to justify the stop and there is no way officers knew the driver’s gender or race at the time the traffic stop was initiated.

Following the arrest, the Concord Police Department received a complaint from Baxter and Grier and are now actively investigating the incident.

“The Concord Police Department takes all allegations of employee misconduct seriously. All complaints are subject to a thorough and rigorous investigative process.”

Lawyers defending Pringle say there was no reason officers should have responded in the way that they did.

Lawyers say “He never posed a danger to officers, nor did he have any outstanding warrants for his arrest. Additionally, the Officers here had no reason to believe he was armed or dangerous. We are fortunate that this incident did not have a deadly outcome as we have seen in similar captured interactions. This is likely due to Mr. Pringles’ safety precautions. If officers behaved this aggressively in a well-lit area with witnesses, how would they have reacted in an isolated and dimly lit area?”