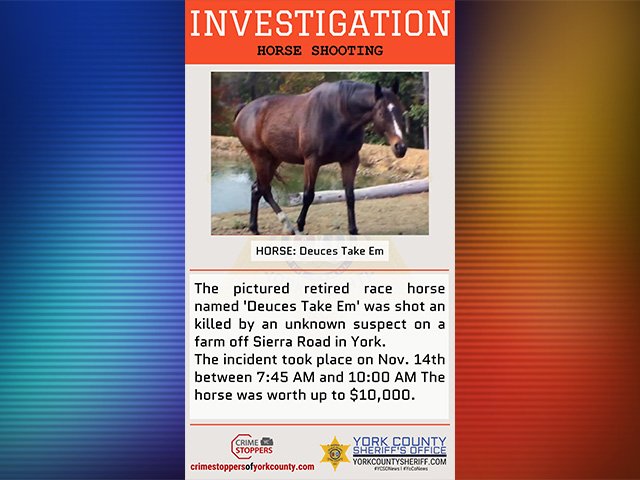 YORK COUNTY, N.C. — An investigation is underway after a horse was fatally shot in York County Sunday morning, according to the sheriff’s office.

The York County Sheriff’s Office responded to Sierra Lane in York after a report was made about the incident. Upon arrival, the owner of the residence, Melissa Thomas, stated that between 7:45 and 9:56 a.m. someone had shot and killed a horse being boarded on her farm. The same person also let other horses out of their fenced in area.

Thomas was able to recover all the horses and could not find any other horses injured as a result of the incident, according to officials. Thomas stated that she did not hear a gunshot during the incident but noted gunshots were not uncommon in the area.

She also informed the reporting deputy that no unusual activity was noticed in recent days.

INVESTIGATION: The pictured retired race horse named ‘Deuces Take Em’ was shot an killed by an unknown suspect on a farm off Sierra Road in York.
The incident took place on Nov. 14th between 7:45 AM and 10:00 AM The horse was worth up to $10,000. #YCSONews #CrimeStoppers pic.twitter.com/TJFQXTTo1Z

Thomas stated that the horse belonged to Thomas Moore.

The sheriff’s office contacted Moore, who stated that his horse, named Deuces Take Em, was a retired race horse that he boarded at the Thomas residence.

Moore stated the current value of the horse was between $5,000-$10,000. Moore stated to deputies that he was not involved with the horse anymore other than paying the boarding fee.