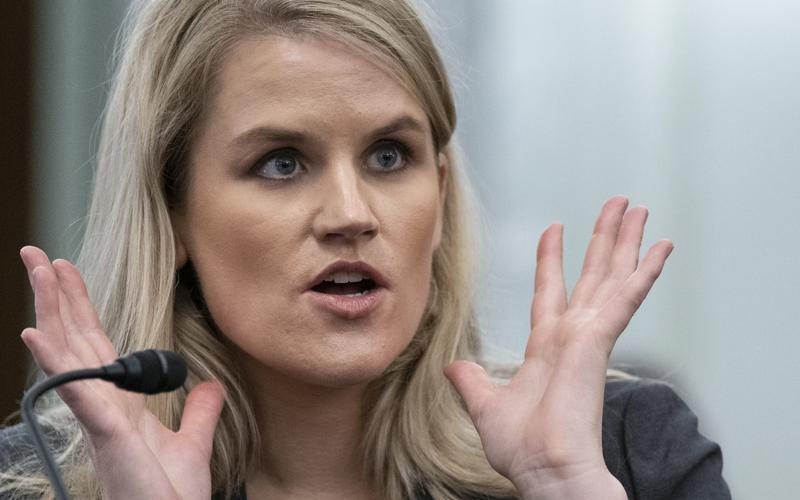 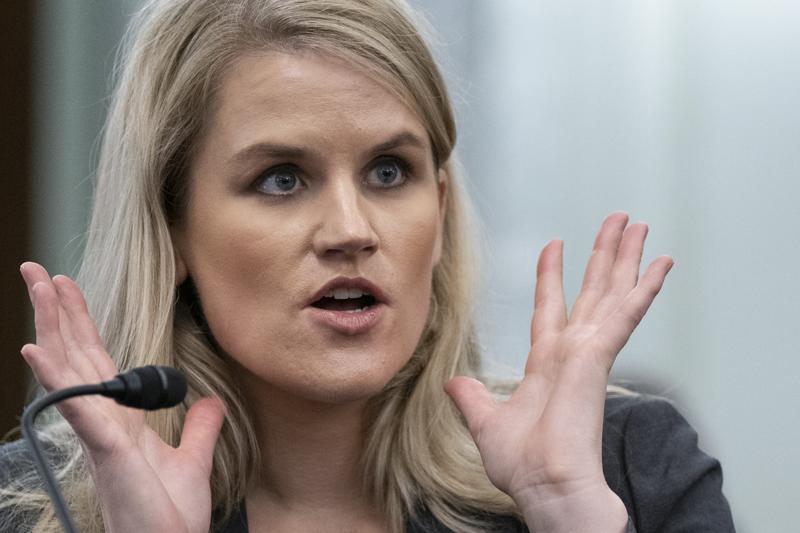 Less than two years after Facebook hired Frances Haugen to help correct dangerous distortions spilling across its platform, she had seen enough.

The idealism she and countless others had invested in promises by the world’s biggest social network to fix itself had been woefully misplaced. The harm Facebook and sibling Instagram were doing to users was rivaled only by the company’s resistance to change, she concluded. And the world beyond Facebook needed to know.

When the 37-year-old data scientist went before Congress and the cameras last week to accuse Facebook of pursuing profit over safety, it was likely the most consequential choice of her life.

And for a still-young industry that has mushroomed into one of society’s most powerful forces, it spotlighted a rising threat: The era of the Big Tech whistleblower has most definitely arrived.

“There has just been a general awakening amongst workers at the tech companies asking, `What am I doing here?’” said Jonas Kron of Trillium Investment Management, which has pushed Google to increase protection for employees who raise the alarm about corporate misdeeds.

“When you have hundreds of thousands of people asking that question, it’s inevitable you’ll get more whistleblowing,” he said.

Haugen is by far the most visible of those whistleblowers. And her accusations that Facebook’s platforms harm children and incite political violence — backed up by thousands of pages of the company’s own research — may well be the most damning.

But she is just the latest to join in a growing list of workers from across tech determined to speak out. Nearly all are women, and observers say that’s no coincidence.

That status positions them to be more critical and see “some of the systemic issues in a way that people who are part of the system and who are benefiting from it the most and who are entrenched in it, may not be able to process,” she said.

In recent years, workers at companies including Google, Pinterest, Uber and Theranos, as well as others from Facebook, have sounded alarms about what they say are gross abuses of power by those in control.

Their new outspokenness is ruffling an industry that touts its power to improve society, while earning billions. Workers, many well educated and highly paid, have long embraced that ethic. But for a growing number, faith in the company line is fading.

Still, there is a difference between stewing about your company’s failings and revealing them to the world. There is a price to be paid, and Haugen certainly knew that.

“It absolutely is terrifying, terrifying to get to the point of doing what she did. And you know that the moment you start your testimony, your life is going to change,” said Wendell Potter, a former health insurance executive who blew the whistle on his own industry’s practices.

Since coming before Congress Tuesday, Haugen has receded from public view. A representative said she and her lawyer were unavailable for comment.

The Iowa-born daughter of a doctor and an academic turned pastor, Haugen arrives in the spotlight with sparkling credentials, including a Harvard business degree and multiple patents.

Long before she became a whistleblower, Haugen was something of a local wunderkind.

Raised near the University of Iowa campus, where her father taught medicine, Haugen was a member of a high school engineering team ranked in the country’s top 10. Years later, when the local newspaper wrote about Haugen’s landing at Google, one of her elementary school teachers recalled her as “horrifically bright,” while not at all self-conscious.

In the fall of 2002, she left for the newly established Olin College of Engineering, outside Boston, to join its first class of 75.

Many had declined offers from top universities, attracted by Olin’s offer of a free education to the first arrivals, and the chance to join in creating something new, said Lynn Andrea Stein, a computer science professor.

But the school couldn’t get its accreditation until it began producing graduates, making it a non-entity in the eyes of some employers and presenting a hurdle for Haugen and others like her.

“The Google folks actually threw out her application without reading it,” Stein said.

Stein helped persuade the company to change its mind, sending an email that described Haugen as a “voracious learner and an absolute can-do person” with terrific work ethic and communication and leadership skills.

At Google, Haugen worked on a project to make thousands of books accessible on mobile phones, and another to help create a fledgling social network.

Google paid for Haugen to get a graduate business degree at Harvard, where a classmate said even then they were having deep discussions about the societal effects of new technology.

“Smartphones were just becoming a thing. We talked a lot of about ethical use of data and building things the wrong way,” said Jonathan Sheffi, who graduated with Haugen in 2011. “She was always super-interested in the intersection of people’s well-being and technology.”

“Nobody puts Frances up to anything,” he said.

While at Harvard, Haugen worked with another student to create an online dating platform to put like-minded mates together, a template the partner later turned into dating app Hinge.

Haugen returned to Google, before moving on to jobs at Yelp and Pinterest, at each stop working with the algorithms engineered to understand the desires of users and put them together with people and content that fit their interests.

In late 2018, she was contacted by a recruiter from Facebook. In recent interviews on “60 Minutes” and with the Wall Street Journal, Haugen recalled telling the company that she might be interested in a job if it involved helping the platform address democracy and misinformation. She said she told managers about a friend who had been drawn to white nationalism after spending time in online forums, and her desire to prevent that from happening to others.

In June 2019, she joined a Facebook team that focused on network activity surrounding international elections. But she has said she grew frustrated as she became more aware of widespread misinformation online that stoked violence and abuse and that Facebook would not adequately address.

She resigned in May, but only after working for weeks to sift through internal company research and copy thousands of documents. Still, she told congressional investigators, she is not out to destroy Facebook, just change it.

“I believe in the potential of Facebook,” she said during her testimony last week. “We can have social media we enjoy, that connects us, without tearing apart our democracy, putting our children in danger, and sowing ethnic violence around the world. We can do better.”

Maybe, but those who know the industry say Facebook and other tech giants will dig in.

“There’s going to be a clamp down internally. There already has been,” said Ifeoma Ozoma, a whistleblower at Pinterest now trying to encourage others in tech to expose corporate misconduct. “In that way there’s a chilling effect through the increased surveillance that employees will be under.”

Within the larger community of whistleblowers, many are rooting for Haugen, praising what they see as her gutsiness, calm intellect and the forethought to take the paperwork that reinforces her case.

“What she did right was she got all her documentation in a row and she did that up front. … That’s going to be her power,” said Eileen Foster, a former executive at Countrywide Financial who struggled to find another job in banking after exposing widespread fraud in the company’s approval of subprime loans in 2008.

Sophie Zhang, a former Facebook employee who last year accused the social network of ignoring fake accounts used to undermine foreign elections, said she was surprised the company had not caught Haugen when she was going through company research. Fierce denials by its executives now betray their unwillingness to change.

“I think they’ve fallen into a trap where they keep making denials and hunkering down and becoming more incendiary,” she said. “And this causes more people to come forward.”

Still, Haugen’s actions could well make it impossible for her to land another job in the industry, said Foster. And if Facebook goes after her legally for taking documents, it will have the resources for battle that a lone employee can never hope to match.

Foster recalls how her boss at Countrywide, an ally, begged her to give it up.

“He said ‘Eileen what are you doing? You are just a speck. A speck!’ And I said, `Yeah, but I’m a pissed-off speck,’” Foster said.

Years later, after enduring villainization by colleagues, rejections by employers and a lengthy court battle over her claims, she knows better. But she does not regret her choices. And she senses a similar conviction in Haugen, though their whistleblowing is separated by a generation.

“I wish the best for Frances,” she said.