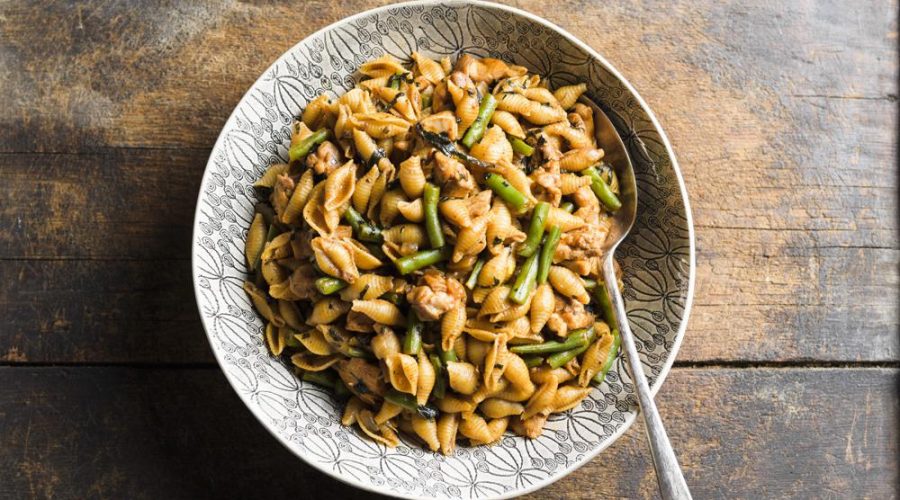 Many Americans think of only a handful of countries when they hear the word Mediterranean. But that sea is surrounded by a diverse set of peoples and cuisines that have been blending — deliciously — for millennia.

Take, for instance, macroona mbakbka, a satisfying one-pot meal that’s considered the national dish of Libya. Pasta made its way into Libyan cooking through Italian colonization during the early to mid-20th century. For mbakbka, it’s paired with spices, tomato and chicken, or sometimes other types of meat.

For our version from our book “Milk Street Tuesday Nights, Mediterranean,” which limits recipes to 45 minutes or less, we brown chicken thighs, then cook pasta shells in a spiced tomato sauce spiked with harissa, a North African spice paste. The harissa is a simple way to incorporate both chili heat and a mixture of aromatic spices.

We also add green beans to round out the dish. For mild palates, or if the harissa you purchase is especially spicy, use the lesser amount; for bolder heat, use the larger quantity, and offer more at the table, too.

In a large bowl, stir together the chicken, harissa and ¼ teaspoon salt. In a large Dutch oven over medium-high, heat the oil until barely smoking. Add the chicken and cook, stirring occasionally, until the chicken is no longer pink on the surface, about 5 minutes. Using a slotted spoon, return the chicken to the bowl.

Add the chicken and any accumulated juices, the pasta and green beans, then stir well. Stir in the boiling water and 1 teaspoon salt. Bring to a boil over medium-high, cover and cook, stirring occasionally, until the pasta is al dente and the mixture is saucy. Taste and season with salt and pepper, then stir in the mint.