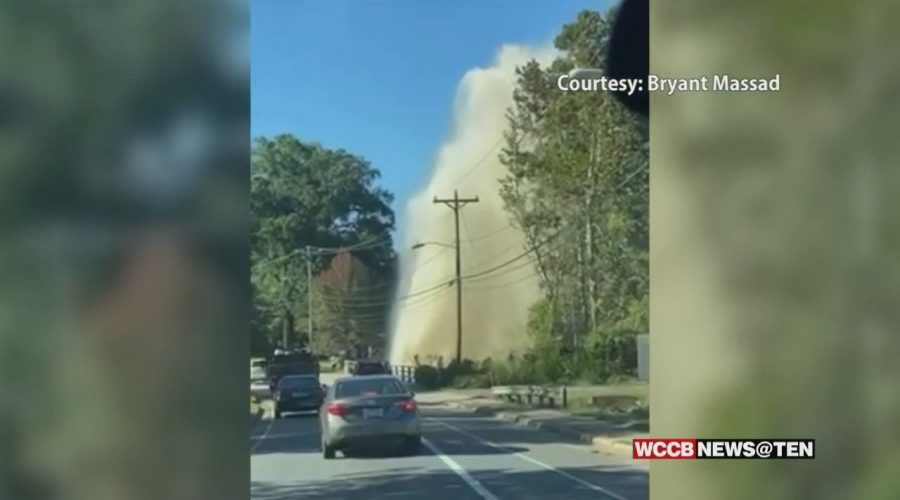 CHARLOTTE — A huge water main break in the 1200 block of Remount Road caused headaches for neighborhoods and businesses across the city, including Charlotte Douglas International Airport.  Charlotte Water is advising residents who experienced low to no water pressure to adhere to a low water pressure advisory for the next 48 hours as a precautionary measure.

Crews say they discovered a 36-inch concrete pipe located under Irwin Creek broken and spraying water several feet in the air.  The pipe serves as a large transmission main that carries water several miles from the water treatment plant to neighborhoods in south Charlotte.  Officials say the pipe has served the area since 1955.

Customers who did not lose water service, do not need to act. However, customers who experienced a water outage and are located in the blue highlighted pressure zone on the attached map, are advised to boil water in an abundance of caution. The advisory is in effect for 48 hours from the time of the break (which will be Wednesday, October 20th evening) or until laboratory monitoring definitively concludes no contamination. Customers can use the online interactive map to determine if their address is in the low pressure zone. 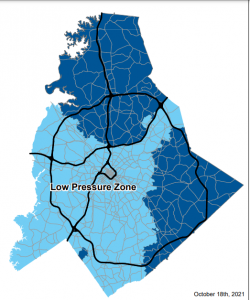 Crews responded by closing nearby valves and isolating the break. Low or no pressure areas were soon restored to full service at approximately 7:30 p.m. on October 18th, 2021.

Though the risk of contamination is very low, technicians worked through Monday night to flush hydrants and take field measurements of drinking water quality. More than 260 locations are being sampled to ensure normal water quality.

Samples are also being sent to the laboratory to confirm field testing results. Official laboratory results are expected Wednesday and will guide Charlotte Water officials in determining if the Advisory can be lifted.

Charlotte Department of Transportation (CDOT) inspected the Remount Rd. bridge and determined that there is no threat to the traveling public.

Staff have also been in consultation with schools that were impacted to develop temporary operational plans for Tuesday and Wednesday.

CLTWater has not received any reports of illness due to drinking water before or during the advisory.

CLTWater is investigating the cause of the water main break and is initiating repairs. Updates about road work and any traffic impacts will be available on Charlotte Water’s website and social media channels.

Charlotte Water will provide updates when the advisory has ended.

According to a news release, the affected areas of the system are roughly bounded:
• To the north by Brookshire Blvd & I-85,
• To the east by WT Harris Blvd and Monroe Rd,
• To the west by of the Catawba River, and
• And to the south by the State Line.

Customers who were affected by low or no water pressure can boil water used for human consumption (including drinking, making ice, brushing teeth, washing dishes and food preparation) vigorously for (1) one minute. Water customers are strongly urged to conserve water whenever possible. This advisory remains in effect until further written notification is issued. Visit https://charlottewater.org, follow Charlotte Water on social media or call 311 for additional updates or questions.

Cell phone video from Bryant Massad shows water shooting out during a massive water main break off Remount Road in West Charlotte. Grayson Sands lives at The Hubb in South End. “I drive by here and it’s just exploding out the wazoo.” Sands said, “So I go to take a shower and the water is just completely out.”

Restaurant 5 Church in uptown, Triple C Brewing in South End, Calle Sol in Plaza Midwood, Crunkleton in Elizabeth… all closing for the night because of the break.

Kaine McAlister lives at Centro Railyard in South End. He says he tried to fill up his water bottle before working out, and not a drip of water. “I was like how am I going to cook, how am I going to shower for work? I was like this goes a lot further than I was imagining when I went to get a glass of water.”