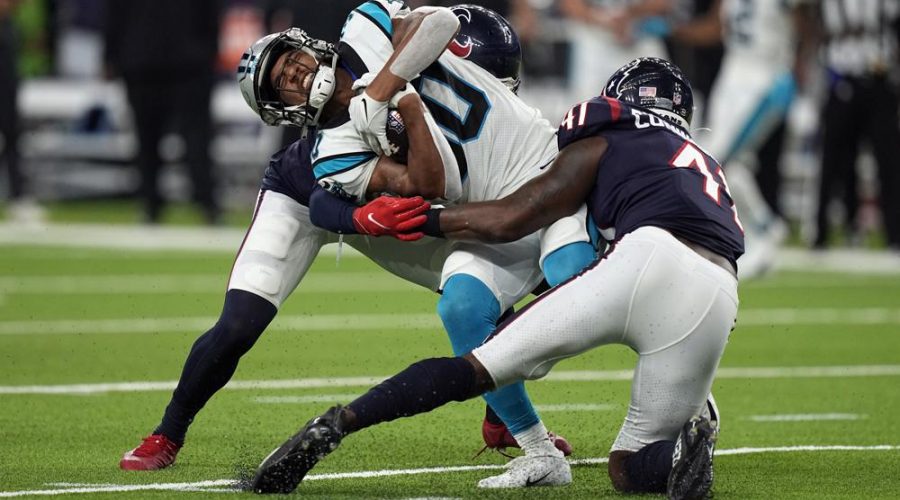 CHARLOTTE, N.C. — As the Carolina Panthers were preparing to make their pick in the fourth round of this past April’s draft, coach Matt Rhule received an unexpected text message from his wife.

“Julie, being a coach’s wife, she’s sat through a lot of games and seen a lot of people,” Rhule said at the time. “It’s funny, I had one former executive who texted me and said, ‘It’s pretty simple. When you play against guys and you hate playing against them, they’re people someday you want to put on your team.’”

On Sunday, the Panthers (3-0) will get an extended look at Hubbard as he’s expected to get his first NFL start against the Dallas Cowboys (2-1) with Christian McCaffrey out for the next few weeks with a hamstring injury.

Royce Freeman will also play running back and the team could promote Rodney Smith and/or Spencer Brown from the practice squad, too.

Quarterback Sam Darnold said that while playing without McCaffrey is “not ideal,” he’s confident the rookie will be productive if he doesn’t try to do too much.

“He doesn’t have to do anything special,” Darnold said. “He just has to do his job every day. That is what we ask of everyone. And we aren’t going to ask him to do anything more just because Christian is out.”

Hubbard had significant playing time last Thursday night after McCaffrey pulled up while running a sweep play in the first quarter of the team’s 24-9 win over the Houston Texans.

Hubbard struggled initially, but seemed to get his footing — literally — in the second half.

Rather than slipping and falling as he had been doing in some of his previous carries, Hubbard started hitting holes hard and finished with a respectable 52 yards on 17 carries. Freeman, who is considered a better pass-blocker, carried five times for 17 yards.

But it was Darnold who ran for two touchdowns while rookie Tommy Tremble scored the other on a tight end sweep.

“I told Chuba at halftime, ‘That’s why we drafted you, man,’” Rhule said. “I thought Chuba was outstanding. At the end of the half, we didn’t give him a ton of chances, but I thought he got in there at the end and made some key runs. When we can line up in four-minute offense and run and get the first down on two plays, especially versus that stout defense, that’s a credit to the offensive line, credit to the tight ends and fullbacks.”

Rhule said it would be unfair to Darnold and the offensive line to dramatically change the game plan just because McCaffrey is out.

Sure, there will be different formations and the Panthers may skip some plays that McCaffrey runs well. But for the most part Rhule has told players they’ll continue to do what they normally do against the Cowboys.

“They’re not asking me to change much at all,” Darnold said. “There are things Christian does out there that you simply can’t replicate. But it’s about me following my reads and knowing where to go with the ball. Those things don’t change for me.”

Hubbard has shown the ability to put up some big games while playing at Oklahoma State, including a 171-yard, two-touchdown performance against the Rhule-coached Baylor Bears in 2019.

That was the one that caught his wife’s eye.

That was part of his best season, where Hubbard ran for 2,094 yards and 21 touchdowns and caught 23 passes for 198 yards as a sophomore. The 22-year-old Hubbard finished his college career with 3,459 yards rushing in three seasons and 33 touchdowns.

“He’s doing a great job in the run game and being able to find the hole,” Darnold said.

NOTES: Cornerback C.J. Henderson, acquired in a trade earlier this week, practiced for the first time on Wednesday. Rhule said it’s unclear if Henderson will play Sunday as he still needs to familiarize himself with the playbook. … Either Sean Chandler or Sam Franklin will start at safety opposite Jeremy Chinn after Juston Burris (groin) was placed on injured reserve.