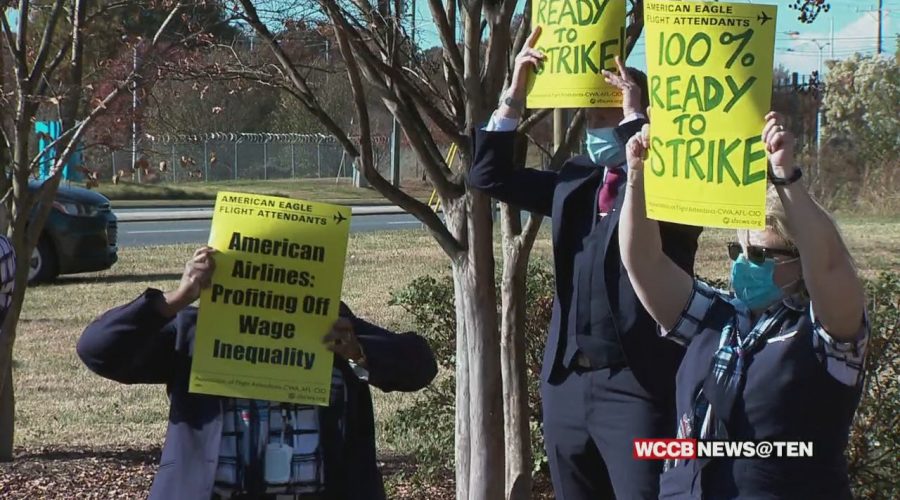 CHARLOTTE, NC – Holiday travel is ramping up as some flight attendants consider a strike at Charlotte Douglas airport. The negotiations with Piedmont Airlines and their flight attendants have stalled leading to a possible strike next month.

Dozens of flight attendants picketed outside of the airport on Thursday.

“It’s unacceptable what we’re going through right now. It’s been over three years. Flight attendants are fed up. We’re fired up. And we’re not going to stop, we’re not going anywhere until we get a good contract,” said Katurah Johnson.

Johnson is the local Union President for Piedmont Airlines flight attendants. Piedmont is a regional carrier for American Airlines which services hundreds of flights a day, many originating at Charlotte Douglas Airport.

“They need to put their money where their mouth is. And give us a good contract,” said Johnson.

She says they make less money than their counterparts and are also dealing with the stress of unruly passengers and holiday crowds.

“We can’t continue to do it under these conditions. Can not,” emphasized Robinson.

“We are dedicated to getting a competitive contract negotiated for our more than 350 Piedmont Flight Attendants……We are in agreement our team members deserve the best contract and we are committed to delivering that to them.”

Negotiations are on hold until December. Flight attendants say that may be the last opportunity to reach a deal.