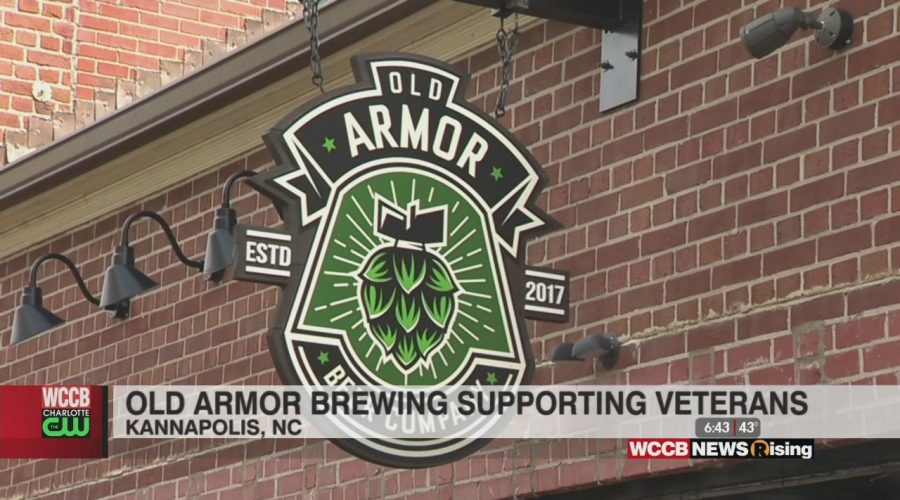 Old Armor Beer Company in Kannapolis is 100% veteran-owned and operated that gives back to the community every day of the year. Kyle Lingafelt and Stefan Perrine came up with the concept for Old Armor when they met in grad school at USC. But, the pair realized they had crossed paths years before. Kyle a marine veteran and Stefan an Army Paratrooper were on the same flight back to the U.S. after a tour in Afghanistan.

With a passion to pay it forward, the two put their heads together to do more than create tasty brews. They created a concept that also supports those who serve their country and communities.

“We do that first and foremost with our ‘Pay it Forward’ on a daily basis. Anybody comes in, they can pay it forward, and then that beer or drink whatever can got to that veteran or first responder,” explains Lingafelt.

North Carolina is one of two states that doesn’t allow a discount on alcohol. Instead, anyone who visits the brewery can donate a drink for a service member or first responder. They have donated more than 3,000 beers since they opened in late 2019.

The second way they give back is through charitable beers where 100% of the proceeds go back to organizations within the community and across the country.

Their charitable beer ‘Angels of Kabul’ was brewed nationally honoring the 13 service members who gave the ultimate sacrifice on August 26 in Afghanistan. Proceeds from this beer will go to T.A.P.S to assist veterans’ families grieving the loss of a loved one.

“We’ve had people drive from all across the country, just because they heard what we’re doing. They believe in our mission and they want to give back,” says Perrine.

The local community has been supportive of Old Armor’s mission as well. “We get a lot of people that come in, and they go we came here because we heard this is veteran-owned, but it’s really cool your beer is awesome, too,” says Lingafelt.

And those who visit enjoy the creative tongue-in-cheek names for the crafts. “Most veterans will laugh when they see some of these especially like the Blue Falcon..,” says Perrine who is also the head brewmaster.

Old Armor and all of West Avenue in Kannapolis is teaming up to honor veterans today beginning at 9:30 a.m with coffee and camaraderie. There will be three speakers including Congressman Richard Hudson, live music, and a BBQ at noon.  They will also be presenting the charitable beers checks for the proceeds from the Angels of Kabul and Skull and Spade beers.

If you can’t make it to today’s events, you can always donate a beer to the Pay it Forward board on Old Armor’s website here.